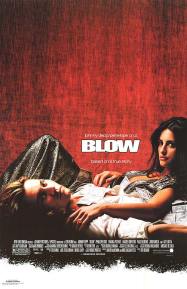 I have successfully avoided Blow for a long time until yesterday. I knew I would hate it for being a “Hollywood” version of the truth.
George Jung, the drug dealer portrayed in this movie is sitting in a prison right now, waiting for his daughter to come visit him. He will be waiting until 2015. Or will he?

Johnny Depp’s performance is excellent and the rest of the characters are very well cast also. Kid grows up in a middle class family, mother is a fuck up, leaves serveral times because there’s no money but always comes back, father is glorified, kid swears never to be poor or become like his parents (can’t escape destiny, we all are images of our parents, scary huh?), kid grows up and goes to California where all the girls are pretty and everyone gets stoned.

And so George finds his way to avoid poverty at the Californian beaches, not realizing what his father tried to tell him when he was just a kid, money is not important. He realizes this later at the age of 41 while in prison taping a message for his dying dad. What got him there? A weed mellowed brain incapable of having more than one coherent thought at a time. I must admit that the whole and repeated FBI busting annoyed me and it makes you wonder just how stupid you can get when consuming that much “blow”. On the other hand, thanks to the FBI his daughter did not have to suffer her father to take her to California. We all know that old dogs don’t learn new tricks. So he’s waiting now for his sweetheart to forgive him and come visit him. Pretty cruel story aiming to arouse our pity.

I am sure there are those who think this is a cool movie. Hot chicks, loads of blow, groovy music and a pool. Yeah totally sweet awesome cool stuff that gets you properly pumped for some Ninja action. Not. It’s supposed to be a biography and I don’t think it performs that well in that respect. You’d be better off with the book if you wanted a biography on George Jung.
6/10