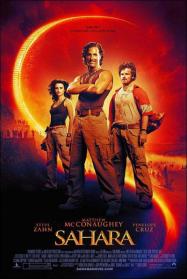 Sahara is a straightforward action movie featuring shallow characters and a minimum amount of plot. Some might argue that there is enough plot to go around for the average movie goer but I beg to differ. Guy searches for Civil War tankship. Woman discovers a plague. They meet. Plot lines merge and coincidentially are solved eventually. And they lived happily ever after, including a blue lagoon kiss scene.

The acting of the two male protagonists was mainly comical, or at least trying to be and thus alienating them from the action. The action itself is sparse and the movie drags along and does little to entertain the viewer. There are some very nice landscape scenes and sunsets in the desert and what else? Penélope Cruz? Nothing worth mentioning. An average action movie.
5/10