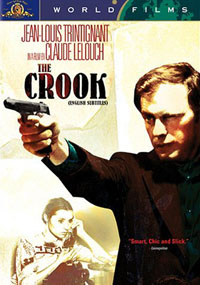 The DVD review on Claude Lelouch’s “The Crook” (1970) featuring Jean-Louis Trintignant is now available on eyecravedvd.com. Hop over there or read on for the movie review.

Simon the “Swiss” (Jean-Louis Trintignant) is the master mind thief in “The Crook” or “Le Voyou” who just breaks out of prison to do a bank robbery of another kind. He kidnaps the little boy of an employee of the bank and blackmails the bank together with his old friend Charles (Charles Gerard) and Martine (Christine Lelouch) his ex lover now married to a rich (yogurt) guy with whom she raises their bastard daughter (but that’s just a tiny detail that is not further explored in any way).

This trio kidnaps the little son as mentioned and then blackmails the bank to pay the ransom of one million dollars or else … you get the drift. The bank is in a precarious situation since not paying the ransom will put the blame for the death of the child on the bank and could be considered less than optimal for business and after much debate the bank finally agrees to pay the ransom.

The way the kidnapping is planned, the whole SIMCA taxi lottery scam, the Santa Claus retreat and the spectacular jailbreak during a wedding ceremony gives this “crime adventure” a certain edge or “flair” that make it fairly entertaining but at the same time also makes you wonder why the director tries so hard to make the bad guy so amicable.

Simon escapes from prison, holds a woman hostage, hides at her place, kidnaps a small boy and holds one more surprise which I will not disclose to you, lest you have no reason at all to see “Le Voyou” in action! I guess it’s supposed to be that “gentleman” criminal who has that certain “je ne sais quoi”! That charm may work on the poor hostage who promptly falls in love with Monsieur Swiss but it doesn’t work on me! That said, I would like to clarify that Trintignant is a well known and respectable French actor and his performance as Simon “the Swiss” is great. The character per se is just not working out for me. Thinking about it in retrospective and taking into consideration that this film is from 1970 there may have been a certain tendency towards romantic gentlemen crime, so it may be feasible after all, it really depends on your personal preference.

Apart from good acting we are also treated with car chase scenes through the streets of Paris in the 1970s and a number of flashbacks by Simon about his jailbreak, revealing his grand scheme “peu a peu” as the French say, also featuring numerous intermissions of the incredibly irritating musical “Le Voyou”.

When trying to categorize this movie I have a hard time calling it a thriller although some elements of crime are present. It does not build up any suspense, it just leads from one stage to the next leaving the outcome open, there is no suspense building up and since we do not get to care about Simon at all, the outcome is not that interesting either. It is an entertaining adventure, a debatably ingenious crime performed emotionless with Swiss precision.