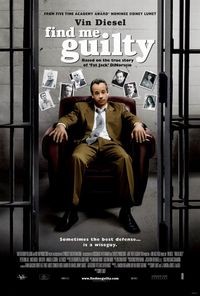 Vin Diesel stars as Giacomo “Jackie Dee” DiNorscio in Sidney Lumet’s “Find Me Guilty” (2006), a mobster who defended himself in court during the longest mafia trial in American history in the mid 80s.

I was sceptical at first with that Riddick image imprinted on Mr. Diesel but all and any doubts were completely unfounded to say the least. Jackie Dee is as convincing a character as he can be and the performance is great throughout the movie and simply a joy to watch.

The movie starts out with Jackie Dee getting shot in his bed mutliple times by his cousin, not fatally though. Still, Jackie believes in family love and certainly would never rat one of his own out to the cops, no matter how deep the hurt. “I love you guys” must be one of Jackie’s most used sentences throughout the whole movie and there are only a few who are resilient to his “gagster” charm.

The jury certainly falls for him and the prosecutor soon has to deal with a laughing jury, much to his dismay, as he points out “a laughing jury ain’t a hanging jury.” As the trial progresses we get to witness a man who has accepted his fate and does not deny who he is and he does go back to prison after the trial anyhow. So much is clear from the beginning.

Whatever the outcome for the rest of the mafia family standing trial together with Jackie is a spectacle well worth watching and I will not spoil anything here for you. Give Vin the benefit of a doubt and see for yourself. Riddick is just one facet, Jackie is another and I hope we see more facets of Vin in the future.