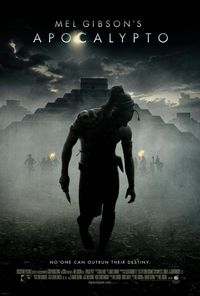 Mel Gibson’s latest film “Apocalypto” (2006) is about a young man Jaguar Claw (Youngblood) who gets captured during a raid on his village. He is marched off with the rest of the survivors to the local temple to be sacrificed.

One thing first, this is not a documentary, so if you expect to see what the Mayan civilization was like then you best go grab some books on the topic. This is just a movie that picks that time era as a setting for what can be only described as a powerful visual and graphically explicit jungle adventure. Any debate on how Gibson fails to accurately depict or slanders a culture long past is futile and those who do, please stop confusing film with reality.

“Apocalypto” is violent and ruthless and maybe shocking for the more sensitive viewers. Gibson delivers an epic adventure, cleverly using the intriguing, mysterious setting of the Mayan civilization emphasized by the Mayan language (no there is no English Audio, stop asking) and the brilliant makeup and cosmetics. In short, everything fits and the viewer is sucked right into this tragic hunt.

Jaguar Claw hides his wife and child from the raiders and they are left in a hole in the ground, to starve or be killed by wild animals unless he can escape the clutches of his captors and return to save them. But who saves him? His situation is hopeless and he is sure to lose his head soon enough were it not for the prophecy of a leper child along the way. This scene is the only weak spot in the whole movie as it does disrupt the natural flow of the story and just creates a pretext for his ensuing escape, one that is just too constructed and feels out of place, a Hollywood moment of which there are but a few.
The real story begins once the hunt for Jaguar Claw is on and soon the hunter(s) become the hunted. Stop gnawing your finger nails! Yes, that’s action, that’s speed, tempo and little bit of story, enough so that we care about the outcome.

All in all, “Apocalypto” is visually impressive, compelling and its setting is certainly adding to the epic flavor, whether or not it is accurately depicting Mayan culture is besides the point. It does succeed in recreating a culture long gone and tell the tale of one man and his fate. The film is made with a lot of craftsmanship and it shows, it just looks stunning in every way.