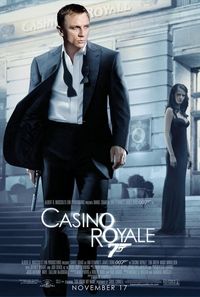 I was very skeptical at first when I read about Daniel Craig being the “new” Bond in “Casino Royale“. Soon, critics would start raving how good he is and how this “Bond” movie takes the franchise back to its roots. Less CGI, more story, more character was the word. And it’s all true.

At 144 minutes “Casino Royale” clocks in as enjoyable as ever. Gone are the cheesy special effects galores, gone are the pitiful impressions of double-O sevens, Daniel Craig is the new Bond with balls of steel as we find out later in the movie when he says:
“Now the whole world will know that you died scratching my balls!”

This is actually the second attempt (3rd if you count the TV episode from 1954) at the story and this time the rights are sorted and the story is actually true to the original unlike the 1967 spoof with Peter Sellers as Bond. The movie actually starts with Bond as regular agent who has to gain double-O status by killing two targets (Dryden and his associate), which we get to witness in black and white in the first minutes.

Bond succeeds, needless to say and moves on to the next objective that leads him to Madagascar, tracking a bomb-maker and after a chase up and down high lofty cranes, Bond nails the culprit at the Nambutu embassy, blowing it half to bits in the the process.

It would not be Bond if he did not have his proper Bond girl and Vesper Lynd (Eva Green) perfectly fits the bill and is as Bond puns it worth “every penny”. Bond meanwhile needs to get into the high-stakes Texas-Hold’Em poker tournament organized by bad guy Le Chiffre at the Casino Royale in Montenegro and Vesper provides the money. Watch out for one nice car being trashed… oh my.

So where’s the romance part? Yes, we are getting to it. After the poker tournament Bond admits his love to Vesper and they spend a romantic holiday in Venice which does include sinking a house and the untimely death of several individuals. Having sent his letter of resignation via E-Mail (gosh) Bond really contemplated to quit the messy “killing people for the greater good of the country” stuff and become a hubby but luckily Mr. White teaches him otherwise which means in turn that Bond needs to teach Mr. White and he does and so a bright future awaits us with many more Vodka-Martinis!