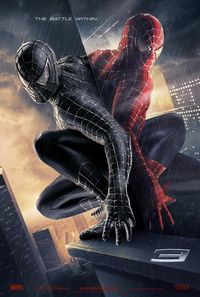 The 3rd installment of the Spider-Man franchise is supposed to be the best yet. Does it live up to the hype? Let’s find out!

“Spider-Man 3” tagged as “The battle within” features two new villains Sandman (Thomas Haden Church) and Venom (Topher Grace) although the latter takes over Spider-Man first turning him into an aggressive Peter “Saturday Night Fever” Parker, strolling the streets of NY city, singing, snipping his fingers and hunting skirts. Certainly not what I was expecting as a side effect of being possessed by some evil, sinister organism from outer space called “Venom”…

Some may find it funny, for others this is a bit too much, especially when paired with all the “Whiney Spidey” pining for his bride stuff, too befuddled with his own ego to pop the question and losing his girl to his archenemy or rather MJ running into the arms of Harry.

Some may find this “marriage” story arc just a little too dominant, reducing the “Venom/Sandman” plot to a mere byline as in “Where do all these guys come from?” when Spider-Man empties the sand from his shoes.

I really felt the 140 minutes and that never is a good thing, especially with scenes like Spider-Man standing in front of a screen filling America flag. Not too subtle…

On top of the “marriage” plot we also have a new “revenge” plot as Peter finds out that Uncle Ben’s real killer was Flint Marko and Harry Osborn still wants to avenge his father, hence the old revenge plot and on top of that we have a new “humiliation” plot which drives a new and aspiring photographer Eddie Brock trying to murder Spider-Man, but being a wuss he first has to become Venom and then team up with Sandman. Why Sandman would team up with Venom? Come on, it’s all about money. Sandman can only get the money for his daughter’s medical care in New York and with Spider-Man constantly in his sandbox, he can’t do anything but kill him, don’t you see that? No? Oh well, best don’t ask and just look, eh?

The action scenes and effects are all top-notch, except for a few of the first Sandman scenes where you can plainly tell that there’s a guy wearing a suit with sand on it or at least it looks that way in one of the scenes. The acting is good and even with the whole “Saturday Night Fever” stuff Tobey pulls it off rather well but it doesn’t change the fact that the comedy part at times comes across as just too much, at the brink of becoming ridiculous.

As in all good fairy tales the bad guys die or some redeem themselves and live or still die and the hero (overcoming the battle within) saves the princess and they live happily ever after. I only wish they would do so with less pathos and try a little less hard to be funny lest they end up being silly.

Was it the best of the three then? If it was, it only means that the other two were even more miserable than the third one. For me, the second one is still the best, then the first and the third comes last. Spider-Man 3 has its moments but fails to live up to the hype and for me the Transformers trailer was the best part of the evening, yet.