“The Adventures of Priscilla – Queen of the Desert” ain’t no “Brokeback Mountain”, so relax. OK you don’t care anyway? Good. Then you may also be able to enjoy the “Abba turd” joke, after all this is a movie about tolerance. If so, you are in for a wild surreal ride of laughter or if you are more for the emotional drama you can laugh less and smile more. One thing is for sure, this movie oozes positive energy and makes you feel good, contagiously so. If you say this ain’t so then I am afraid we have to agree to disagree and let bygones be bygones.

This “Extra Frills Edition” is a new release of the originally 1994 released Australian indie movie about three drag queens on a road trip through the Outback. It is a “gay” movie indeed, in the original meaning of the word. Personal interests aside, this is not a kids movie and some may not have any interest in musicals and even less so in musicals where male actors dress up in women’s clothing, wear tons of makeup and all sorts of silly stuff is happening on screen. Having said that, “Priscilla” isn’t quite a musical, it has quite a lot of music in it but it is not a musical per se, yet the actors move their lips to the sound of music, they don’t actually sing, just like in a musical, huh? OK, it is a musical, sort of… and yet it is a road movie, too.
END_OF_DOCUMENT_TOKEN_TO_BE_REPLACED

Here I was, not knowing about this show “How I met Your Mother” for two full seasons until a friend of mine brought it up and still I wasn’t really that much interested from what he told me. I mean, who wants to listen to a guy telling his kids the story about how he met their mother? Right? Fast forward two weeks: I have just finished watching Season 2 and to answer the question: I do and so do you! Believe me, this show is awesome, nay… it is legen… WAIT FOR IT… DARY!

I went to see “Shoot ‘Em Up” (2007) directed by Michael Davis without reading anything about it and so I was in for quite a surprise.

The film starts out with the hero “Smith” (Clive Owen) sitting on a bench at night waiting for a bus, munching on a carrot when a pregnant woman in a yellow raincoat stumbles by moaning. She disappears in a nearby alley and is being followed by a very angry man with a gun. This prompts our hero to get involved and angry, too. From that moment on it is all about shooting people.

END_OF_DOCUMENT_TOKEN_TO_BE_REPLACED

Want to save time? Stay away from these three shows, they suck.

Reaper (2007)
Sorry Kevin, this one is just poop. I am very disappointed in you. What happened? I predict “Reaper” will not make it to Season 2. And sorry Tyler, after “Invasion” you yet again stumbled into another doomed series.
Ihad says: Stay away from the Reaper!

Bionic Woman (2007)
Another 70s remake. Give me a break! Who needs this crap? Horrible acting, horrible script writing. Please axe this show now.
Ihad says: One of the producers quit after 1 week … he was smart. Be smart too, switch channels.

Flash Gordon (2007)
And yet another remake, this time of one of my sacred childhood memories. Granted the classic series is horrible but it is classic and charming in its own way. This remake is just horrible. What were you thinking? Lucky you, Season 2 is already canceled.
Ihad says: Watch at your own peril. I will tell the real Ming!

What you may want to watch are these shows, though!

Pushing Daisies (2007)
Ned, a pie maker, can bring dead people back to life by touching them. The catch? After one minute someone else will die if he doesn’t touch the victim again. Surreal, witty, funny, obscure and refreshingly delicious. The show premieres on ABC, Oct. 3rd.
Ihad says: Watch it!

Damages (2007)
High-stakes litigator Patty Hewes (Glenn Close) is the head of this twisted legal thriller series. Trust no one. There will be blood.
Ihad says: A must watch!

How I met your mother (2005)
No new series and I only have seen the pilot so far. Hilarious… no, legen… dary! The series has been highly recommended to me by a friend. It is returning with Season 3 this Monday, September 24th, on CBS.
Ihad says: A must watch.

And of course Heroes, House and Boston Legal, all returning next week. 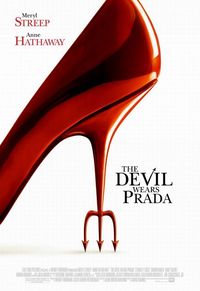 “The Devil Wears Prada” directed by David Frankel and starring Meryl Streep as ruthless and cynical Miranda Priestly and Anne Hathaway as her new assistant Andy Sachs does not quite deliver the goods. Streep’s Oscar nomination certainly is justified but her performance does not save this film from being just about average with little to no depth and nothing to really motivate the viewer to get interested in any of the characters.

Despite the catchy film title you will not find any “devil” in whatever sense of the word and the “Prada” you get to see is worn by vain shallow characters who are only mildly entertaining and as tragic as a hair in your soup.

END_OF_DOCUMENT_TOKEN_TO_BE_REPLACED

Nonverbal Communication of a different kind…

“Psych” premiered this weekend on USA network and is about a guy Shawn Spencer (James Roday) who has something like a photographic memory when it comes to his surroundings. As a kid he got trained by his father, who was a cop, to memorize every and anything around him at all times. He does not have any psychic powers but his gift makes it possible for him to see clues and connections where others fail and he does disguise it with theatrical performances, which can be amusing at times. He gets involved in solving a kidnapping case for the police and starts off his own PI business together with his friend Burton Guster (Dulé Hill), no doubt taking on more cases in the future.

“Boston Legal” is a spin off of “The Practice” and while I am normally not into law shows, Denny Crane (William Shatner) convinced me otherwise or should I rather say his friend Alan Shore (James Spader) did.

Markus (not Aurelius) and I were talking about TV shows a week ago while having Sushi for lunch and I told him that he must go see “Rome” (but first read my review on it) and so he did and now his friends do, too and so on. What does that have to do with “Boston Legal” you might ask; nothing and everything.

END_OF_DOCUMENT_TOKEN_TO_BE_REPLACED

Vin Diesel stars as Giacomo “Jackie Dee” DiNorscio in Sidney Lumet’s “Find Me Guilty” (2006), a mobster who defended himself in court during the longest mafia trial in American history in the mid 80s.

I was sceptical at first with that Riddick image imprinted on Mr. Diesel but all and any doubts were completely unfounded to say the least. Jackie Dee is as convincing a character as he can be and the performance is great throughout the movie and simply a joy to watch.

END_OF_DOCUMENT_TOKEN_TO_BE_REPLACED

“Harry & Tonto” is a road movie of a different kind. You can read the full DVD review over at eyecravedvd.com or read on for the movie review.

The movie starts out by showing old people walking down the streets in New York accompanied by piano music ending up showing Harry and Tonto on their way to the groceries. This introduction is great for setting the pace and mood of the whole piece. The exposition of the character basically consists of Harry’s monologue with Tonto as listener narrating little anecdotes, things of the past, leading up to the eviction of Harry Coombes as he is carried out of the building sitting in his chair he fell asleep in with Tonto on his lap, sprouting out curses (quotes from Lear) at the top of his voice.