As with all Potter movies I had no expectations whatsoever and the 4th instalment evolving around the The Goblet of Fire is no exception. What works well in the book, does not really transport too well onto screen, the Tri-Wizard contest is boring to watch and basically just sets the stage for the actual plot, a plot that is just too obvious and leaves no room for speculations and eliminating any possible suspense even if you haven’t read the books.

The “kids” are getting too old for their parts and Daniel Radcliffe never impressed me so far with his acting talents. However, if you like the books so much then you might also like the movie version of it.

Granted, this one is darker than its predecessors but that does not make it neccessarily better. The effects are OK but nothing I am too thrilled about either. Movies that rely on CGI too much are at risk of being shallow. Potter 4 is just that, a shallow Pop-Fairytale mass product, albeit a well made one.

END_OF_DOCUMENT_TOKEN_TO_BE_REPLACED

If you haven’t seen “Dark City” then you might hold off just a little longer. This splendid dystopian Sci-Fi flic was underrated and butchered when it came out on DVD (R2 version) and I am more than delighted to say that there will be a Director’s Cut version out in 2006. I am very much looking forward to following Murdoch (Rufus Sewell) around once more to uncover the truth about Dark City. Keep an eye on Proyas’ official site for more news.

Tim Burton’s “Corpse Bride” is loosely based on a Russian folktale where a soon to be groom unknowingly cites his marital vows to what seems to him like a wooden stick that looks like a hand reaching out of the ground. The wooden hand comes to life and a terrified Victor (Johnny Depp) finds himself in the clutches of a cursed corpse bride.

At the very beginning of the movie you already realize that you are in for a meticulously composed piece of art. From the sweeping of the broom to the wagging of the tail to the cutting of the fish everything moves in the rhythm of the clockwork opening theme composed by Danny Elfman. The musical score is not quite as memorable as in “Nightmare before Christmas” and more generic, yet it does have its grand moments, e.g. the “Corpse Bride” song.

END_OF_DOCUMENT_TOKEN_TO_BE_REPLACED

“The Brothers Grimm” is a silly movie. It has a certain pythonesque quality that you need to be able to appreciate otherwise you will most likely think it’s a stupid movie. It isn’t. There are of course countless references to Grimm fairy tales and sometimes these are presented in a most absurd manner – something you have to expect from Terry Gilliam and it’s something he delivers.

At one point we suddenly cut to the two brothers Wilhem (Matt Damon) and Jacob Grimm (Heath Ledger) wearing bonnets while scrubbing the floor and making dinner for their italian torture master Cavaldi (Peter Stormare), easy to spot as a reference to “Cinderella” but also very… “pythonesque”.

END_OF_DOCUMENT_TOKEN_TO_BE_REPLACED

Being a Muppet fan, I watched the Muppets’ Wizard of Oz version hoping for the best expecting the worst. The result was somewhere in the middle. They really should have avoided CGI, esp. such incredibly crappy one as we get to see here. The only thing… err prawn that saves this movie is Pepe (Bill Barretta). He is hilarious, esp. the “nipples” scene is great.
The “Behind the scenes” also features him interviewing the cast and is a real treat, esp. his interview with Quentin Farentino… uh… I mean Tarantino who also has a small appearance in the movie (as himself).
5/10

I have seen the Ghost in the Shell (Kôkaku kidôtai) and the shell was naked. what if not a naked shell is all we leave behind in the end. Besides all the fast paced action and nudity this movie has the dystopian quality of “Blade Runner” only more centered on the desert of the real – the net. Somehow I got reminded of David Brin’s short story “Piecework”, esp. when it culminates in a new breed planted inside the synthetic body of a child.
So what defines being human? The ghost in the shell?
8/10 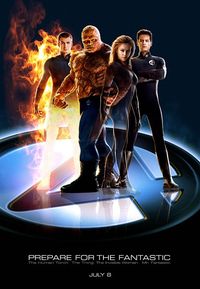 The Fantastic Four are pathetic. Just goes to show that you just can’t have a movie with effects and no story. And excuse me? What’s with the 4 finger thing?

Hey, invisible girl, we need to get past them, please undress in public so you can go totally invisible and we can cut to the next scene where you dress yourself again. Thanks!

I rarely rate movies as low as 1 but “Van Helsing” while theoretically deserving a 4 for craftsmanship in cutting, costumes and sf/x, I cannot rate it higher than 1 due to its utmost abhorrent script – plot? what plot? – performance and feeble attempts to be funny. What happened? I did enjoy “The Mummy” tremendously, I even liked the “Mummy Returns” but this is an outrage and Kate Beckinsale – already proven to be worst actress of the year in “Underworld” – seems to have a fable for showing off her body instead of her acting talents, which might prove difficult as these are seemingly nonexistent.

There are indeed many viewers who enjoyed this shallow pop corn flick and it’s their good right to do so, but as fan of the genre I could merely wince in my chair seeing how such a potential character as Van Helsing goes to waste in yet another instalment of “all show and no brains”.

Yet it began really promising with the hunt for Mr. Hyde (very nice CGI there) but sadly these first 15 minutes are the only highlight of this movie and Richard Roxburgh seems to be only actor worth his grain of salt.

Go see “The Mummy” again instead.