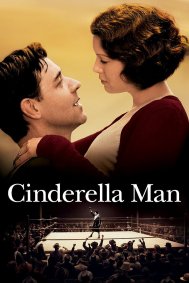 If you do not know anything about the man then judging from the title alone, you’d never guess what “Cinderella Man” is about. If you have never heard of Jim Braddock before then even better. Go see this movie, don’t read up on anything, don’t google for the name, just don’t. Go see it without knowing anything about it (like me). And don’t look at the poster! Oh no… too late!

OK, so you want to know more! Fine! It has Mr. enfant terrible Russel Crowe in it and Miss Chainsaw can’t act for a Massacre Renée Zellweger, which might make it even worse. “Miss?” Yes, that’s right, thanks to “legal language”, Renée no longer is married (or rather never was) and what is more, she was in “that” movie and what a performance she gave; nothing much has changed since then. The only time I thought her well cast was in “Nurse Betty” and I wonder why… but let’s not get sidetracked and rather focus on Braddock: the hero of New Jersey back in 1935.

You may or may not like Crowe, be it as it may, he does deliver solid performance here (type cast) portraying the underdog Jim Braddock. Let’s just skip Renée who is playing his wife Mae Braddock for now.

Another movie about boxing? Yes. Another “Rocky“? No. Another “Million Dollar Baby“? No.
It is true, it is a movie about American values but even more so it is a movie about not giving up, about survival, about enduring and about overcoming sheer hopelessness and turning things to the better. It is a modern fairy tale with all that comes with it including a happy ending.

Ron Howard again teams up with Crowe and while the result is not without cliché and stereotypes, once you see beyond its limitations and shortcomings and focus on the story, you realize that it actually is a real story and suddenly you connect to the characters. Even more so since Crowe really gets into the role of Jim Braddock here and makes the character so convincing.

So what about Mae? Don’t get me started. I admit, I have seen worse from Miss Zellweger but to date I cannot fathom why one would want to cast someone who cannot sing nor dance for a musical (“Chicago“) other than have a contrast on how incredibly talented the rest of the cast is. I mentioned “Nurse Betty” already and I probably should add “Cold Mountain” to the list of “well done Miss Z.” but does that make her a good actress? You know my answer. Anyway, Renée is Mae and we have to deal with it. It could be worse.

The championship fight is the heart of the movie and since I know all about boxing (not!) I can tell you that you’re in for a gruesome 15 rounds of flying fists all the while thinking that good ole Jim is dead meat. Since you read on I might as well tell you who won! No. I will let you guess.
Either way, you will be in for some quite schmaltzy scenes before and after the fight and, yes, they include Miss ‘Chainsaw’ Zellweger. You have been warned!

All in all it was a good movie, considering the fact that you can’t be factual about a whole era in American history by showing snippets of a man’s life on celluloid and besides, using “Hollywood” and “factual” in the same sentence is an oxymoron per se.

“Cinderella Man” is a story about an underdog of a man and how he became an icon of hope in a time of depression.
8/10

Russel Crowe apparently has managed to track down and buy the actual receipt Jim Braddock got when he paid back his government relief money. Mr. Crowe says that he is going to look after it now. [source]