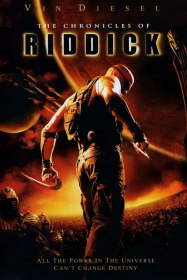 “The Chronicles of Riddick” is just more Riddick, more CGI, less story, less character development than in “Pitch Black”. Besides having Riddick as protagonist, the two movies are not connected with each other and once again he finds himself smack in the middle of a life and death situation, this time in form of the extremely hostile company of Necromongers bent on dominating nothing less and nothing more than the whole universe.

There is a scene at the beginning where all the Necromongers, facist bunch they are, rally to hail their Lord Marshal, which greatly resembles a scene from “Triumph des Willens” and I bet it’s no coincidence either.

Even though the facist master race is led by an all powerful half alive half something else Lord Marshal who commands the powers of the Underverse (yeah right), Furion and facist misfit Mr. Riddick will just kill everyone (that matters) and keep what he kills, just as we expect him to do. Honestly, I don’t think anyone else than Vin Diesel can actually play Riddick; let’s face it, he is Riddick. No really, who else could growl so impressively?

Still, “The Chronicles of Riddick” is entertaining but it does not reach the intensity of “Pitch Black” and is hardly more than a solid SciFi action movie on CGI steroids.
5/10